The following is a gallery of images taken with the RCT telescope on Kitt Peak. All images are Copyright © 2000, G. A. Esquerdo and the RCT Consortium.

The images seen here were taken with a small, commercially produced CCD camera during test observations with the RCT prior to refurbishment. These images were intended to show that the telescope would be suitable for many of the RCT tasks, as well as to diagnose what work would be necessary to get the RCT to the desired level of functionality. 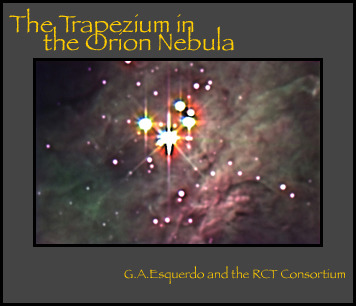 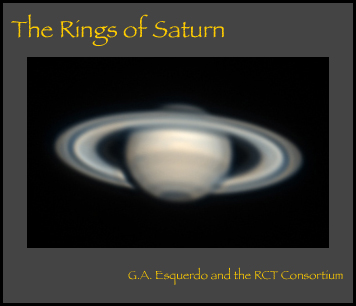 A high resolution, color image of Saturn and its rings made with the RCT telescope. This is a combination of red and blue images, as well as a synthesized green image. The final image was run through a sharpening routine to enhance the detail in the image. The colors seen here are very similar to what is seen through a telescope by eye. 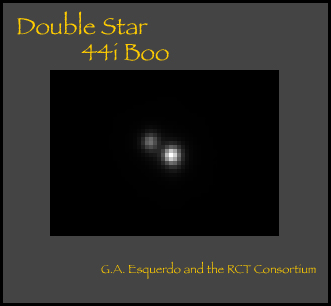 A 0.3 arcsecond per pixel image of the close binary star 44i Boötes taken with the RCT. This is a sum of one hundred, 0.1 second exposures, giving an effective exposure time of 10 seconds. Each image was part of a 300 image series from which the images with the best seeing were extracted and summed together. The result is this high resolution view of this double star. The RCT has not been used extensively in this mode, but can make use of nights with the best seeing conditions by observing in a similar fashion.

The RCT consortium, especially G. Esquerdo. M. Everett and R. Gelderman, would like to thank the Kitt Peak support staff for returning the RCT to functionality for the purposes of this test.