For the second summer in a row, the RCT was used by students attending the astronomy camps  directed  by Dr. Don McCarthy .  Four camps held in June and July engaged a total  93 teenagers from the US and five  foreign countries .  The RCT was used for temporal monitoring of two comets, a flare star and Saturn’s moon Titan. The picture below shows the campers at the 12-meter telescope observing the transit of Venus.  The other image is a mosaic of several nights of observing Titan in orbit around Saturn, which was part of a project using Kepler’s Third Law to determine the mass of Saturn. Titan is shown as different colored dots which represent four different epochs of observations 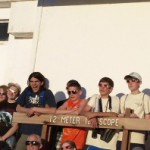