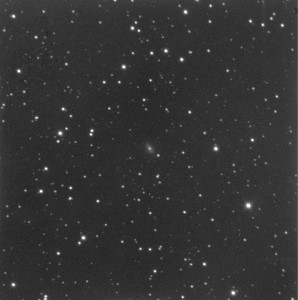 Oil (probably from the last days of the old compressor) was removed from the dewar window by Don Walter at the end of May. This has eliminated the curious-looking ‘coffee stain’ present on recent images.

The above unreduced image of Zw229-015 gives a fair idea of current image quality. 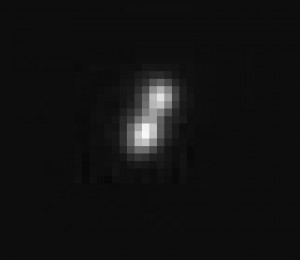 Current resolution with 2×2 binning (0.58 arcsec/pixel) is shown in this image of Eps Boo taken through the U filter. Separation is 2.85 arcsec.

The new mirror support cell air compressor is now fully installed and operational. It is set to provide 12 inches of water (0.43 psi), a little higher than the nominal 10 inches of water (0.36 psi), and appears to be holding well. There is a refrigeration desiccant system on the compressor (to keep moisture out of the lines) that is not currently installed. It should be installed in the next few weeks, as soon as the proper fitting can be installed.

The problem with the dome encoder does not appear to be with the encoder itself, rather with the encoder input channel to the pmac. The pmac has 2 cards with 16 possible channels, of which 10 (or so) are in use by the various encoders. One card has only two encoders, the focus and the dome azimuth, and it appears that the input channel for the dome azimuth (#6) is corrupted. Brevin was able to remap that channel to an open channel (#8), which appears to have fixed the problem. The dome is now making repeatable rotations to the same commanded azimuth positions, without significant failure.

However, it now appears that the dome is no longer synced with telescope. The telescope points correctly, but the dome azimuth is significantly off, by as much as 90 degrees depending on location. This is repeatable for the same telescope positions, indicating that it is not a loss in encoder counts. Further, its correctable by commanding the dome to the telescope azimuth. This, unfortunately, does not provide a fix as tracking forces the dome to update its position, immediately rotating back to its previously determined, incorrect position.

It is not clear how the dome receives its commands, from the telescope azimuths or from its own pointing model, but in either case something is not responding correctly. I’m in discussions with Treffers to see what can be done.

Following some thorough testing, we’ve determined that the dome occulting issues were due to a failing encoder that will be replaced this week. The failing unit has been removed, and the dome is currently off.

Further, our mirror support compressor has finally ceased to function. Brevin will purchase a replacement this week.

After many tests, we now think either the dome encoder is failing or the dome power supply is incorrectly set, following the powerout for the UPS replacement. More updates soon.

The pointing was recentered (off after worm-gear lubrication work) and the focus was readjusted (for seasonal drift).

Folks,
Several have noticed the following behavior in the last few nights with the RCT:

I believe these are all symptoms of the encoder slippage and worm gear oscillation. I believe they needing cleaning/re-greasing. I’ve put in a service request with KPNO. I still think part of the PSF is mirror support related, but we wont know for sure until we eliminate the other sources of confusion.

Tonight I was able to zero point the telescope, and test the guider. It appears that the pointing tolerance for accurate guiding is about 15″, or ~20 pix from the absolute center of the chip. Guiding works better now, but it does not improve the PSF substantially.

Data archive is back. There may be a little lag in getting data from the last few nights.

Folks,
They are installing new power outlets in our server room. The computers, including mnem, will be down until 10/9.

The mirror support compressor’s pressure switch, which activates and deactivates the pump, burned out. It was replaced with a new switch, one with a bit more control on its activation pressure, which should reduce the wear on this part.

The problem with the mirror support compressor seems to be resolved, and the telescope should be working normally. I will check the focus and pointing again tonight, then resume the scheduler.

The new UPS has finally been fully installed, and is operating. After checkout tonight, the telescope is workable with two important exceptions.

The mirror compressor is not working, and the mirror appears to be resting on its supports. Brevin installed a new capacitor in the unit on saturday, so it is surprising that the compressor is failing again so soon.

The dewar is not cooling as it should, likely due to the lack of vacuum in the dewar. This is expected since the polycold unit has been off for some time.

I’ve sent requests to KPNO and to Bruce Cook to have evacuate the dewar and look at the compressor, which I hope one or the other can get to sometime this week. The telescope scheduler is off until these can be resolved.

Folks,
The new UPS was delivered on Saturday, 10/15. However, Brevin was unable to finish the installation due to other scheduling issues. Bruce tells me that they will go up again in the next few days, this saturday at the latest. The capacitor in the mirror support compressor has also failed and will be replaced when they return this week.
-Lou